I was honoured to be asked to create 46 trophies for Coleg Meirion Dwyfor’s Student Awards ceremony.

I wood-turned 46 Beech wood disks, then laser-etched each one and hand bound royal blue thread around the edge of each trophy to add the college’s colour.

Then, I created the stands for each trophy out of the off-cuts.

I thoroughly enjoyed making these trophies, and they were very well received by the staff and the students. 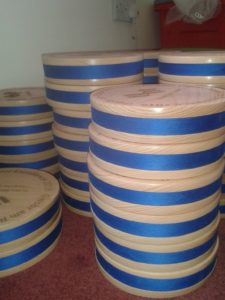 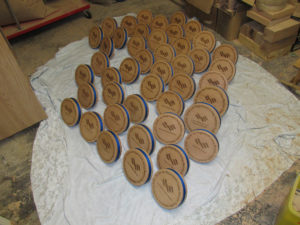 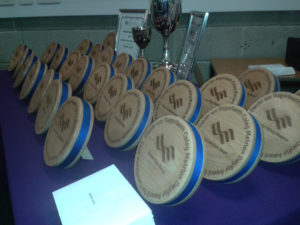 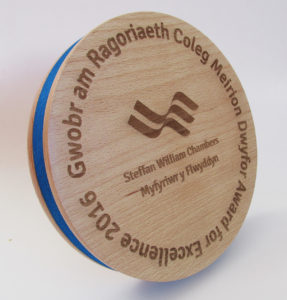 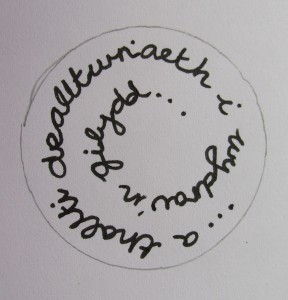 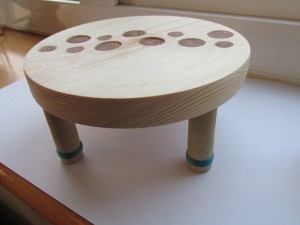 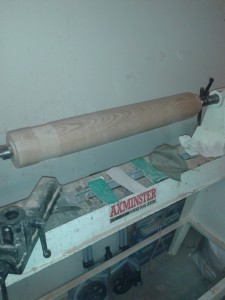 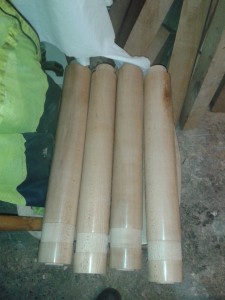 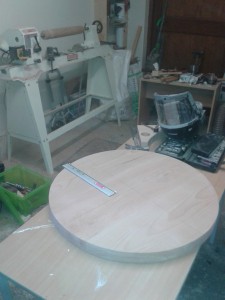 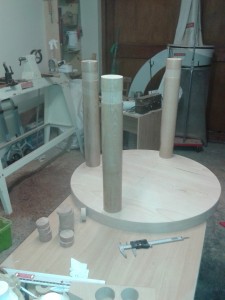 drilling holes into the table top for the legs 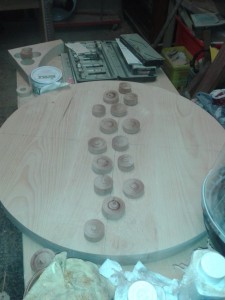 laying out the disks for drilling. 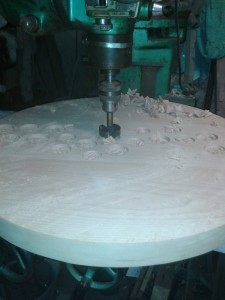 drilling holes for the disks 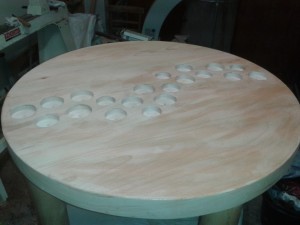 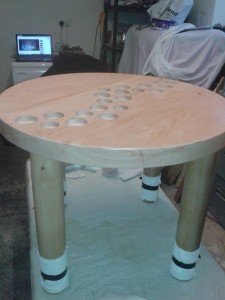 the table ready for the disks. 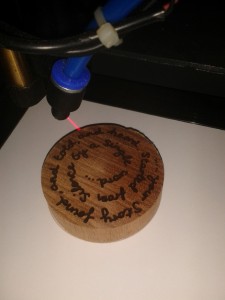 laser etching the poems onto the wood 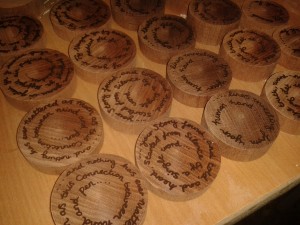 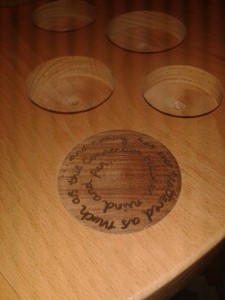 gluing the disks in place. 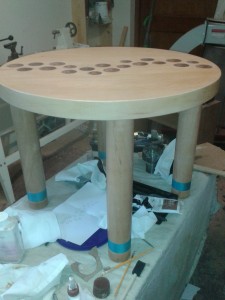 the disks in place and the thread binded. 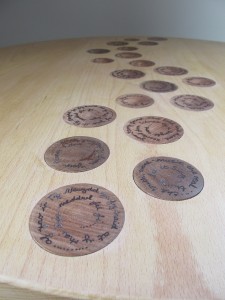 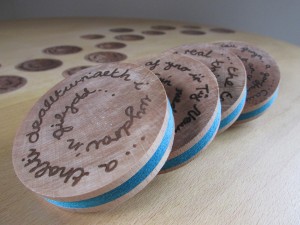 crating ‘coasters’ out of the off cuts to accompany the table. 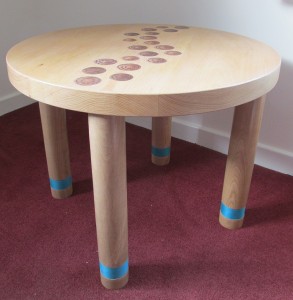 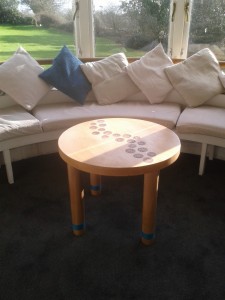 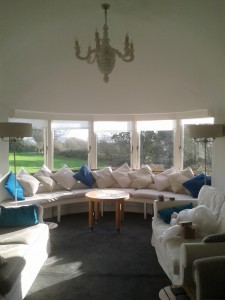 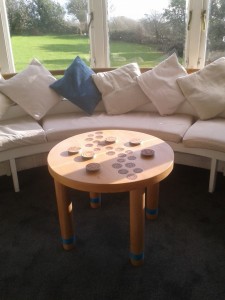 Recently I was selected to create a bespoke coffee table to be placed in Glyn Jones library at Tŷ Newydd, Llanystumdwy.

Tŷ Newydd is currently a Literature Centre at Llanystumdwy. Tŷ Newydd was also home to David Lloyd George, prime minister during the First World War. It is believed that the library is where Lloyd George during his final days sat in his chair overlooking Cardigan Bay.

The brief for this commission had to respond to Gillian Clarke’s poem about Tŷ Newydd and Guto Dafydd’s Poem ‘Hiraeth am Dŷ Newydd’.

My idea was to create a coffee table which responded to both poems and their surrounding. Both poems  describe Tŷ Newydd as a special place for writers, a place that allows words to pour out onto a page, where stories are discovered within the silence of the  white walls of the house. It’s a place where writers can identify with each other.

Couplets from both poems will be inserted into the surface of the coffee table to create the imagery of ‘flowing’ or journey, as Guto Dafydd’s poem speak’s of traveling to Tŷ Newydd and Gillian Clarke talks about words flowing and stories being found and starting to sing.  Therefore the words will be placed as though they are ‘flowing’ through the middle of the coffee table like a song.

The coffee table is made from Beech wood, as a lot of Beech trees are planted on the grounds of Tŷ Newydd at the order of Lloyd George when he worked with architect Sir  Clough Williams Ellis to renovate the house.

The other reason the table is made from Beech is that it’s a rather light coloured wood, and shall symbolize Tŷ Newydd as a building, while the discs with couplets of the poems etched on the surface will be made from Sapele, a red wood to symbolize the heart and soul of Tŷ Newydd and the special atmosphere that flows within the walls of the building, and seeps into the soul of each person who visits the place.

The shape and form of the table is round to reflect the bay window it is situated, and the Teal thread at the base of the legs is to correspond with the distinct colours of the Clough Williams Elis windows at the house.

This has been the biggest commission I have done so far, and the most challenging and rewarding one too. It is a privilege to create something that will be part of this very special house’s history. Having worked at Lloyd George’s Museum over the Summer of 2014 , I learnt a lot about him, and came to admire him. It is overwhelming to know that something I have created will be situated in the same room where one of Britain’s greatest statesman sat to admire the view through the window.

I hope the residents at Tŷ Newydd will enjoy the table as much as I enjoyed creating it. I have never worked on a product of such scale before and learnt a lot about the process of making. For some methods I was fortunate enough to have the help and assistance of my Uncle who is an extremely knowledgeable and experienced carpenter, and had appropriate tools to cut and glue the top of the table. My little workshop in the garage wasn’t quite  equipped enough to carry out the work from star to finish . My little workshop in the garage was not equipped enough to cater for such a large item! I am so grateful that my Uncle allowed me to work at his workshop for gluing the top of the table and legs together. As the table’s components came together the weight of the table also increased!

Here are both poems with images of the process of making to follow.

Before we came, the house was a shell

with the sea-winds in it. Sometimes now,

gathered in silence here at the table

under the beams, where long ago

in your mind, and an image fire

the dark, and nothing has ever mattered

as much as this connection between mind

and pen, lines unreeling from your human hand,

your story found, and told, and heard,

started from silence by a single word,

the truth, word-music, the real thing.

The past two months have been extremely busy and I cannot complain as I have enjoyed every second! Let me update you on what I’ve been up to….

Recently I was invited to present my products in front of Liberty London’s panel of Expert buyers for their ‘Best of British’ Open call day. It was a truly extraordinary experience. I was mesmerized by the store. Me and my Mum were like two country pumpkins gazing at this unique building. We queued for 7 hours and met some lovely makers in the queue.
Pitching my products to Liberty was a thrilling experience, and the comments I received about my work were incredible, and I was a little overwhelmed, as I assumed I had no hope in hell of impressing the Buyers. I spoke at a million mile a minute.. aware of the 4 minute I had to explain my work, my inspirations and business to the Expert.
Being told that my work is “beautifully crafted and well made” has given me confidence and a boost. I love what I make and as a maker I work alone most of the time and don’t often hear feedback,. I am so grateful for the opportunity to present my work to Liberty.
Check out their promotional video for the day! There is a glimpse of my products at the end of the video. You will spot one of my flower pots pictured below. over 600 designer makers pitched their products on that day..the atmosphere was incredible, such a buzz! it goes to show that craft and design is thriving in Britain.
http://www.liberty.co.uk/best-of-british/article/fcp-content
After arriving back in Wales I had a meeting with Merched y Wawr, Mynytho. I gave them a presentation on my journey so far from studying at MMU in Manchester to where I am now with my business and the stories and experiences I have encountered along the way which has impacted on the development of my craft work. I would like to thank them all for their warm welcome, and for a really enjoyable evening ( and for feeding me really nice biscuits and tea ) thank you so much for your kind words about my work. 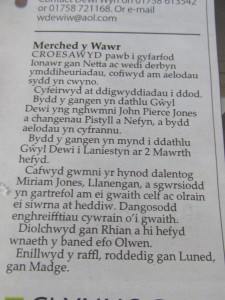 I have also been working on a Commission for Ty Newydd, Llanystumdwy. I was chosen to make a unique coffee table that responded to Gillian Clarke and Guto Dafydd Poems. More details on this commission to follow later with images of the process of making.
Category: News 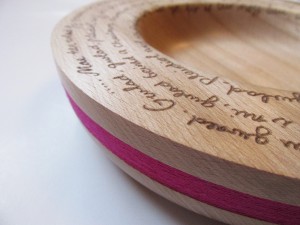 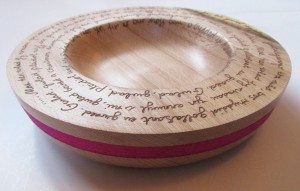 New design on it’s way to ‘Land of My Fathers’ Exhibition at Victoria Fern Gallery, Rhiwbina.

I am glad to announce that i now have a new website with a shop!!

You can now browse my shop and find your perfect gift for this Christmas! I shall be updating it regularly so stay tuned for new items and sales.

Buy something handmade and completely unique for yourself to wear or to display in your home.

I would like to thank D13 Creative very much for his help in getting my website up and running! I am totally useless with things like this and have learnt a lot during this process, he is very good, very knowledgeable and very professional! Diolch yn fawr iawn i chi!

-Work featured in ‘golwg’ magazine as part of ‘love spoon showcase’ in Oriel Mostyn 2011.
-Work came down to last 5 out of 400 in the Young Artist Scholarship Award 2011- and was approached by S4C to feature in their programme ‘Bro’ to discuss my work and journey to Kilimanjaro.